When you’re standing on the bus, feet straddled either side of a stranger’s knee, your bag of groceries in the care of a Mama Africa you’ve never met so that your hands are free to hang on for dear life, stooped over with no choice but to your head resting on your neighbour’s shoulder, a rogue elbow resting on your own shoulder because personal space schmersonal space, the back of your neck thumping against the roof of the bus with each speed bump (and believe me there are many), and the flustered cluck of a chicken from the seat below you. This my friends, is when you know you’re in Africa.

And such was my daily experience in Arusha.

Arusha is one of Tanzania’s main hubs, where thousands of tourists converge to tackle Mt Kilimanjaro or to try their luck at game spotting in the Serengeti. Having opted to do neither of the two, I found myself with 5 nights to kill here.

We stayed at a campsite called Snake Park, another time-honoured tradition on the African overlanding circuit, and for good reason. Snake Park supports a life saving snake bite clinic which provides free medical care to approximately 1000 Tanzanians a month. Proceeds from the bar go directly to the clinic, so getting drunk here almost feel honourable. Any wonder all the overlanders make themselves at home here!

Being about 20 minutes out of town, I got very well acquainted with the local bus system. The easiest way to get to Arusha from Snake Park is by Dala Dala, essentially a beat up mini bus decorated in either rapper, football teams, or bible quotes. They’re cheap, they’re easy to figure out, and as a tourist you’re a guaranteed novelty so the locals are generally eager to help you out with directions and stops. Sure you might have to share the back seat with a farm animal, but it’s either that or pay $30USD to catch a taxi (I’ll take a goat over that any day)!

Driver Nick tasked us with trying to use up as much of the truck’s food stores as possible during our time at Snake Park, so we decided a party was in order. A surprise, children’s birthday themed, farewell/congratulations party to be exact. We were saying goodbye to Lottie and Carolyn who finished their journey with us in Arusha, as well as celebrating Carolyn and Helen’s mammoth feat of making it all the way to the top of Mt Kili without dying. If they didn’t deserve to eat all our truck reserves of powdered hummus and sweet onion pickle then who did?

We went into full party planning mode and every day was spent busing backwards and forwards into Arusha tracking down party food and decorations. We made streamers, donned party hats, and we even managed to make a cheesecake! I should probably be ashamed to admit that we spent approximately $25USD on cheese so we could have cheese and pineapple sticks, but I’m not. Those cheese and pineapple sticks were good.

The party was a hit, and despite a few bittersweet tears the girls were absolutely stoked. Not as stoked as Nick, the winner of pass-the-parcel, who now had a Mills and Boon to keep them company at night.

As for me, I was just looking forward to riding goat free in the back of the truck again. 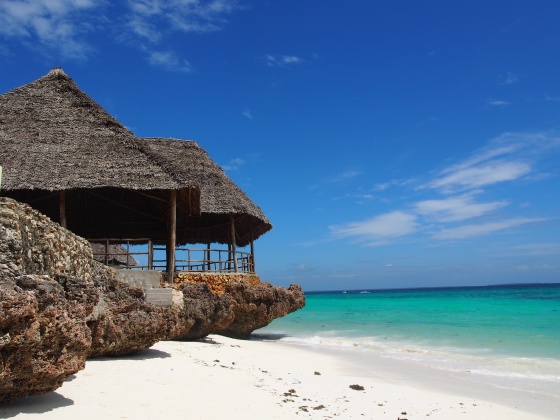 A warm coastal breeze, crystal clear water, and palm fringed beaches. There’s nothing quite like it to inspire a girl to switch off and pretend she’s not an overlander for a few days.

After living on our truck for six whole months, I could think of no more perfect way to escape than lying by the pool, strolling down the beach, and sipping cocktails by sunset each night. It’s not that I didn’t love the truck. I did. It’s just that sometimes you need a real holiday.

Zanzibar was our holiday.

We’d been talking about it since just about day one, how excited we all were, and it didn’t disappoint.

We spent our first three nights at a quiet beach resort in Nungwi, a little beachside village at the northernmost part of the island.

Once we’d been handed our room keys there was nothing else for it but to kick back and relax. We had three nights here and I became quickly proficient in the art of doing absolutely nothing. Floating between the pool, the cocktail bar, my bed, and the beach. It was perfect. 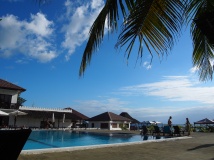 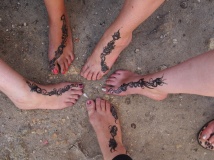 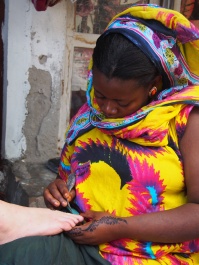 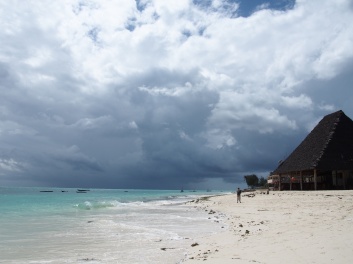 Our final night in Nungwi also happened to coincide with our 200th night of the trip. 200! Can you believe that? It only felt like yesterday that we were celebrating day 100 at the Presbytarian Mission in Cameroon with cold showers and a rather endearingly misshapen campfire cake. How far we’ve come! I have no idea where the time went, but in spite of my concern at such a massive amount of lost time, it was an awesome excuse to get dolled up, leave the comforts of the resort, and head out for dinner with my truck family.

After three nights of pure bliss, we begrudgingly packed our bags and boarded a mini bus back to Stone Town, stopping along the way to do a spice tour. The spice tour was unexpectedly awesome. We learnt about all kinds off spices and tried all sorts of things that I wouldn’t have even though edible. Towards the end one of the local guides showed off his climbing prowess, scaling an entire coconut tree barefoot to retrieve fresh coconuts for us to drink. I was far too anxious about how high we was to truly appreciate the skill involved, but looking back at the pictures…what a DUDE! 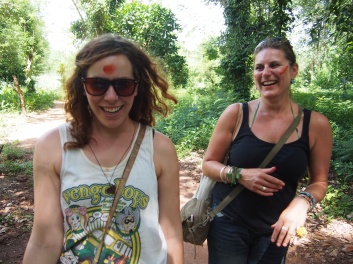 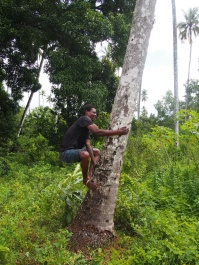 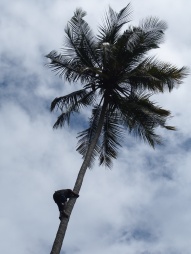 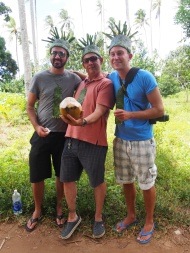 Stone Town, with it’s winding alleyways, brought back memories of Morocco. I went for walk hoping to find some tacky souvenir stores and ended up spending an entire afternoon getting lost and navigating my way back to the hotel. That one orienteering class at Uni really paid off! As it turns out I didn’t get anywhere near the souvenir store side of town, but I saw the women nursing babies and playing games with chalk on the stone pavements outside their houses, the men coming and going from hidden away mosques, and the children playing with discarded VHS tape. I felt like I saw the real Stone Town rather than the quaint white washed buildings they chuck up for us tourists, and I loved that. 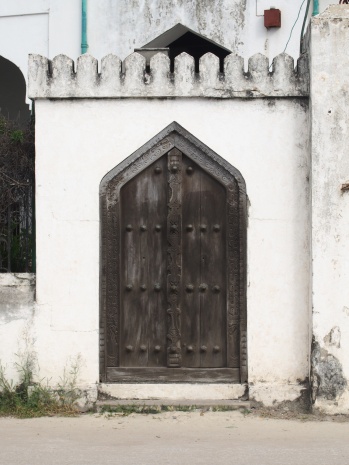 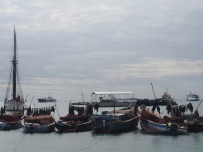 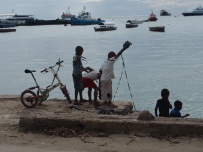 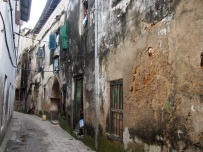 It wasn’t an easy place to part with. After all, Zanzibar is paradise. But we had safaris and gorillas and all manner of things to look forward to in the coming weeks, and so we took off the bikinis, put our overlanding pants back on, and headed back to the truck with fresh sun tans and a renewed zest. I have a feeling it won’t be my last trip to Zanzibar.

In my opinion, nothing says welcome to the country quite so much as a merry band of black market money changers robbing the living day lights out of you and your friends on the border. So as far as welcomes go, I’d say Tanzania’s was tip-top.

I wanted to fall in love with Tanzania immediately, not in the least because two of my favourite west coast passengers hailed from the country, but also because it’s home to Zanzibar, the Serengeti, Mt Kilimanjaro, and all manner of other fun sounding places. Sadly, it was not to be (don’t worry though because things do get better in the next blog instalment).

Driver Nick had warned us prior to the border crossing not to change money on the border because the black market changers there were, and I quote, “dodgy bastards.” We took that with a grain of salt figuring that all money changers are generally dodgy bastards but if you make sure to count everything twice you’re generally okay.

Looking back, I cannot emphasise enough just how high on the Dodgy Bastard Scale the Malawi-Tanzania border money changers really are.

I got off lightly, only losing the equivalent of about $8 when my money changer ran off with my cash. But not before wrestling a much larger sum of my money out his hands. Wanker.

Darren actually came out better than he started when he decided to chase his guy. The money changer had run off with all of Darren’s money. Darren found him hiding behind a bush, crash-tackled the poor unsuspecting crook into said bush, and snatched his euros back, incidentally grabbing more money in the process. He had accidentally come back wearing the money changer’s flip flops (both blue, they’d gotten mixed up mid-fisticuffs), and he was covered in scratches from the bush, but he was pretty smug in the end having just acquired the world’s best exchange rate.

Dennis, at the sprightly young age of 68, also came back covered in scratches after chasing his money changer down the street.

Em was the worst hit though, quite literally losing hundreds of dollars. She’d been changing not only her money, but also food money from our local payment while Driver Nick was sorting out the truck in customs.

The moral of this story, though I’m loathe to admit it, is that sometimes (i.e. most of the tim) your TL tends to be right.

And so, if ever you find yourself at the border from Malawi to Tanzania, slightly bored because let’s face it, African immigration processes tend to be more than tedious, don’t change money. Unless you are prepared to crash tackle a man into a bush and then wear a strange man’s flip flops for the remainder of your journey, just wait until you find a Forex.